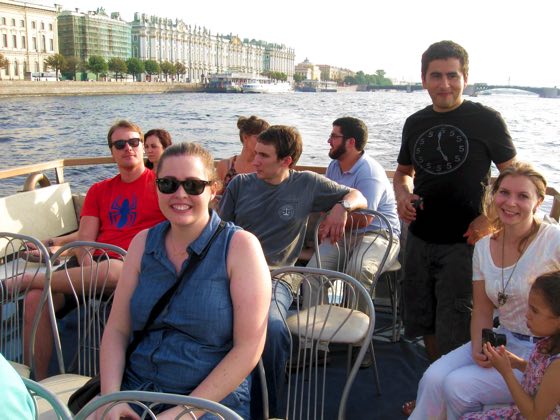 The University of Arkansas School of Law continues to innovate with its study abroad and international law offerings. The Russia Law Summer Program, held in July and August, included two weeks of courses at the Fayetteville campus, and two weeks in St. Petersburg, Russia.

While at the School of Law, the eight students in the program took classes from American and Russian faculty on topics including the Russian Constitution, Comparative Religious Freedom, Secession and Breakup of Nations, and International Tax.

In St. Petersburg, the program comprised lectures on Russian Civilization and Cultural Dimensions, Human Rights, and Legal Issues in Russia, as well as visits to the DOC, LLC legal and consulting firm, and to the legal department of INTRATOOL, an oil and gas pipeline and repair company.

In addition, the students participated in group trips to cultural sites such as the Hermitage, Peterhof, Catherine Palace, and Alexander Palace, and took in Swan Lake at the Rimsky-Korsakov Conservatory. Some of the students made excursions to sites such as the Museum of Defense and the Blockade of Leningrad and followed historical tours on Vladimir Putin and Fyodor Dostoyevsky.

For more information about the program, contact Professor Howard Brill at hbrill@uark.edu.

“At the beginning of the trip I felt that the Russian people were somewhat cold and standoffish. While I was sitting on the beach at Peterhof, I was able to see another side of Russians that I have not seen before. I watched groups of friends laugh and pose for pictures and siblings get in fights and moms scold their children. For some reason it made me realize that there are some fundamental differences between Russians and Americans but underneath it all we are very similar.” — Christina Cole

“The program coordinators were fantastic in taking students to most of the city’s major tourist and cultural attractions in such a short period of time. The maintained a balance between being on the go and having down time for rest and personal travel. In its capacity as legal study abroad, the program’s most valuable assets were the visits to the law firm and the oil and gas firm.” — Cristen Handley

“Visiting the top law school that many famous Russian politicians attended was probably my favorite part of this excursion. Being able to attend the ballet that trains the dancers who perform in the famous Mariinsky ballet was also amazing. With my background in dance I could really appreciate the level of talent.” — Kaylyn Turner