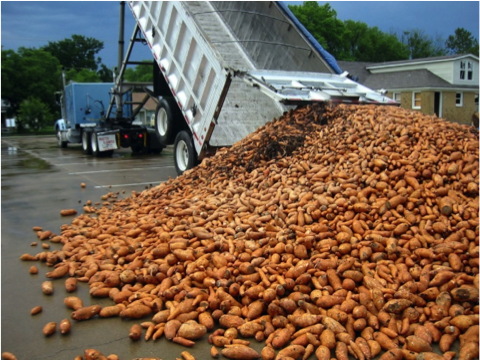 Globally, One-third of all food produced is lost or wasted between the farm and fork. This translates into 1.3 billion tons of food waste, 1.5 quadrillion lost Kcalories, and $1 trillion dollars spent on wasted food. Simultaneously, 821 million people worldwide face chronic food deprivation and 11.8 percent (15 million) of U.S. households experienced food insecurity at some point in 2017. Food waste is not a new problem, but it is a mounting one: America’s per capita food waste has increased by 50 percent since 1974.

Food waste occurs at every level of our food system.

Farming & processing: crops are left to rot in fields for a number of reasons; the cost to harvest might be less than its market value; “blemished” produce is perceived as undesirable; and the complexity of contracts with processors make distribution of smaller quantities of produce unfeasible. At the manufacturing level, about 4 percent of the product is lost during processing.

Retail & food service: around 16 billion pounds of food is lost in the U.S. at the retail level annually. Most of this waste is from perishable and prepared foods. Grocery stores also overstock products to enhance the customer experience and create an appearance of abundance. U.S. restaurants generate between 22-33 billion pounds of food waste annually. Strict policies regarding prepared food at chains, mishandling, unpredictable sales and large portions are significant contributing factors to waste in the food service sector.

The home: Americans waste the most food in the home, equating to about 76 billion pounds annually, or 238 pound of food waste per person. Date labeling confusion, packaging size, and poor storage habits are significant contributing factors.

Wasted food isn’t cheap: disposal costs, resource and energy costs, and emission costs all have a price tag. Nearly 18 milliontons of GHG emissions could be reduced by avoiding methane emissions from scraps disposed in landfills. Food waste also accounts for 21-33 percent of U.S. agricultural water use, and the equivalent of 19-27 percent of fertilizer use.