Antonio “Tony” Jones has a heart for helping others. The 3L from Fort Smith takes little for granted and has distinguished himself at the School of Law as a leader, particularly in the area of pro bono service.

As the school’s inaugural Pro Bono Fellow, a role that celebrates his commitment to public interest, Jones has focused on educating fellow law students on the importance of using their developing legal skills to improve their communities. Additionally, the fellowship has given him a voice to further define and develop the school’s pro bono program. 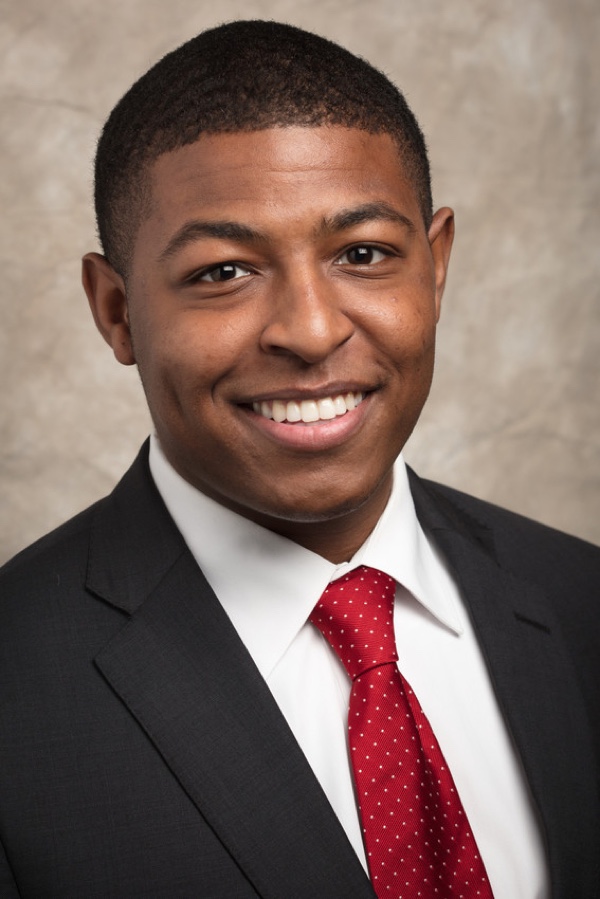 Jones, who can frequently be found volunteering at events such as “Arkansas Free Legal Answers,” sponsored by Arkansas Access to Justice and the American Bar Association, credits his upbringing for his awareness of the plight of others.

“I was trained to respect others by my mother and grandparents. They really drove that home for me, and over time, that correlated with what was going on around me. I realized that I am happiest when I am helping others.”

Jones, an Eagle Scout, is very much a product of Fort Smith. His Boy Scout Troop was sponsored by his church and his final project was the construction of a concrete and brick sidewalk on the church campus. He is a 2012 graduate of Fort Smith Southside and a 2016 graduate of the University of Arkansas – Fort Smith. He must have left an impression as he earned a Bachelor of Arts in media communication because he was invited back to deliver the fall 2019 commencement address.

“When the chancellor asked me, I almost cried,” Jones said. “It is still hard to believe that I was invited to participate. It was such an honor. I told the graduates the lessons that UAFS taught them will carry them into the next stage of their lives.”

Jones has always been interested in how law affects everyday life. His desire to make the world a better place drew him to law school, and the University of Arkansas School of Law’s reputation, in addition to its proximity to Fort Smith, made Fayetteville a logical choice. As a 1L, he took part in the school’s activities to honor the legacy of Silas Hunt, the first African-American admitted to the School of Law, on the 70th anniversary of the admission.

Some of Jones’ leadership positions have included chair of the law school’s Honor Council, treasurer of the Black Law Students Association and vice president of the U of A Student Chapter of the National Lawyers Guild. His favorite law school course was Race and Law, taught by professor Steve Clowney.

“The course forced us to engage in dialogue over complex issues involving race, poverty and justice. I enjoyed it because it was interesting to hear other student’s take on these issues, as well as work to form my own opinion on the subjects we discussed.”

“Tony is one of my favorite students, ever,” Clowney said. “He fights relentlessly for things he believes in. But he does so joyfully, and he remains open to the complexity of the world.”

Jones’ dedication to understanding complex issues, ability to engage in diplomatic discourse, leadership potential and demonstrated commitment to pro bono service made him the logical choice as the school’s inaugural Pro Bono Fellow. 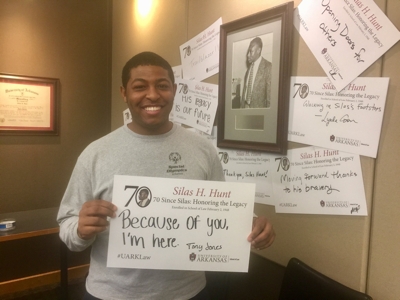 “Tony has demonstrated his leadership repeatedly this year,” said Annie Smith, associate professor and director of the school’s Pro Bono and Community Engagement program. “He is always among the first to sign up for opportunities, and he has proposed successful innovations to our program. He also created a video to teach his fellow students how to volunteer for pro bono opportunities.”

Jones envisioned and has hosted a series of “Pop-in for Pro Bono” events. Students are encouraged to drop by for a bag of popcorn and learn more about the program and opportunities offered through the school.

The Pro Bono and Community Engagement program was created in 2016. It has grown and continues to focus the school’s commitment to providing pro bono service opportunity for students and faculty. Since June of 2019, students have provided approximately 1,350 hours of pro bono service.

Jones’ development as a lawyer has been supported by the Arkansas bench and bar. He has clerked in the Washington County Public Defender’s office, and he has been a judicial extern in the chambers of Benton County Circuit Judge Doug Schrantz and United States Magistrate Mark Ford. He received the Arkansas Bar Foundation’s Wilson and Associates Ethics Scholarship (2019-20) and the University of Arkansas School of Law’s P.H. “Hugh” Hardin Memorial Scholarship (2017, 2019).

Jones’ immediate plans involve focusing on the July bar exam and looking for employment. He is most interested in public interest and criminal law positions but will go where employment opportunities take him. In the long term, he may take on another type of public service.

“It would be cool to run for office … any office where I can make a difference.”