Christopher Barnes is one of the 131 new J.D. candidates the University of Arkansas School of Law welcomed this August. He is excited to return to Arkansas after an extended stay in Tennessee and has settled into the demanding coursework of his 1L year with enthusiasm. He is quickly becoming an important member of the law school community. 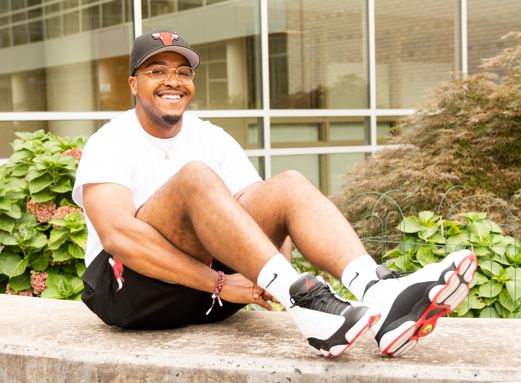 Law school at the University of Arkansas was a natural next step for Barnes — he knew he wanted to be a lawyer from a young age and knew he wanted to earn a degree from his home state. Although still in his first semester of law school, Barnes has a clear and long-held desire to become a corporate lawyer.

“I am interested in becoming a corporate attorney because I have always wanted to know the behind-the-scenes part of corporations and I am interested in being the ‘guy in the middle,’ Barnes said. “I like serving people and helping them in the best way I can. Seeing people and companies get taken advantage of inspired me to attend law school so I can be a voice for them.”

Given his interest in corporate law, it is not surprising that Contracts, as taught by Sharon Foster, the Sidney Parker Davis Jr. Professor of Law, is his favorite course of the first semester curriculum. Barnes says that Foster, and University Professor Howard Brill, the Vincent Foster Professor of Legal Ethics and Professional Responsibility, who teaches Civil Procedure, are “performative,” which helps students understand the material well.

When asked if the difficulty of the first year of law school has lived up to the hype, Barnes says he knew it would be difficult, and it is. “In undergraduate school you had a syllabus week before a professor jumped into the subject matter of the course. I didn’t expect that [that law school] would become so difficult so fast”.

Barnes is the 2021 recipient of the Boone, Johnson, Neely and Wilson Legal Opportunity Scholarship, created through the generosity of School of Law alumni Cornelius and Tea’ Boone, Greneda Johnson, Efrem Neely, and Angela Wilson. The group, all members of the University of Arkansas School of Law Class of 2007, created the scholarship to encourage and facilitate diverse students in choosing law as a profession.

Barnes, a self-proclaimed history buff, practices a unique hobby in an academic way: he collects sneakers, admits to having about 60 pairs, and enjoys researching the historical context of each pair.

“Most of them are Jordans,” Barnes said. “They were released at a time when Michael Jordan had memorable games in each of the different colorways. For example, these (pointing to the shoes worn to the interview and pictured) are Jordan 13s. Michael wore them when we won his last NBA Championship in 1998 and Denzel Washington had worn them when he portrayed Jordan in the movie, He Got Game.”

Barnes knows the names of the designers of each pair of shoes and has even repurchased some of the sneakers he owned during his childhood.

Now that the fall semester is well underway, Barnes looks forward to exploring the many opportunities the school offers in terms of externships, clerkships, and student organizations. He has already joined the Black Law Student Association and, when not so busy with the 1L curriculum, he plans to investigate participation in the Business Law Society. He looks forward to engaging with the state’s bench and bar as he progresses through the law program.

The faculty and staff of the University of Arkansas School of Law is very happy to welcome Christopher back to Arkansas and his “Home on the Hill.”