Turquoise Early loves sports. The 3L from Fayetteville grew up watching sports with her father and treasures the time he spent with her explaining the rules for all manner of competitions. She also played basketball from first grade through high school. So, when it came time to plan a career path, she knew she wanted to work in sports business and her preparation included law school. Although her interest in sports business has not waivered, the many courses and experiences encountered during law school have created a new career interest and an appreciation of all areas of law. 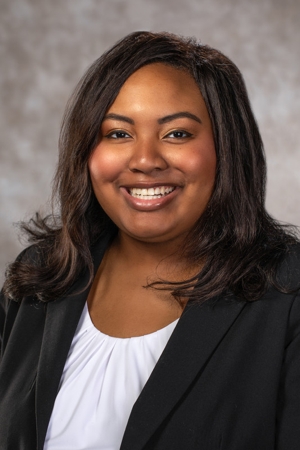 As is true with many students who grow up in University of Arkansas-influenced Fayetteville, Early wanted to expand her horizons with the college experience. She chose to attend Baylor University in Waco, Texas, for very specific reasons.

The Hankamer School of Business at Baylor offers a Sports, Strategy and Sales, or S3, emphasis to marketing majors. Additionally, Early was able to gain practical experience working with the school’s athletic marketing staff managing game day experiences and promotions for fans. She completed the competitive marketing program in 2017, earning a Bachelor of Business Administration.

She enjoyed her time at Baylor but decided to return to Arkansas for graduate studies. Her mother, a small business owner, encouraged her to pursue additional education, and law school made sense for a career in sports management.

Early’s excellent academic record, complemented by a well-rounded background, prepared her for success in law school. She was the 2018-19 president of the Sports and Entertainment Law Society, vice president of the Black Law Students Association and the women’s minority representative for the Student Bar Association. She is a member of the Phi Alpha Delta Law Fraternity. Her favorite law school course has been Wills, Trusts and Estates taught by professor Steve Clowney.

“I liked it most because it was the first class I did not mind reading for, and I enjoyed the way it was taught,” she said. “I think I found it so interesting because at some point all of us will be impacted when a love one dies – making the material more relatable than other subjects.”

Early has taken advantage of the school’s robust externship program. She completed two externships with Walmart and one in the university’s Office of the General Counsel.

“Turquoise is a shining example of a student who conscientiously did the work, made the sacrifices and reaped the reward,” said Angie Doss, director of externships. “She didn’t let disappointments stand in her way, and she never gave up on the Man upstairs. I really admire that.”

Externships with Walmart’s Privacy and Digital Citizenship Office, first as a 2L and then again as a 3L, opened Early’s eyes to another interesting and appealing application of the law. The experience, particularly at a cutting-edge company like Walmart, led her to veer from her planned career path to one in rapidly evolving technology law. She applied for a position with the Technology Transactions and Licensing group of Kutak Rock LLP and plans to begin working in the firm’s Omaha office in the fall.

The swift development of technologies that allow companies to collect information about their customers, and the value of the data, is happening in an environment lacking well-developed federal law. Early’s research on the law surrounding the location tracking technology many companies are using in phone applications has led to a fascination with the ethical questions surrounding the use of technologies such as Radio Frequency Identification (RFID),

Wi-Fi and GPS. Early is drawn to the work because the technology is changing quickly, as are the legal and ethical questions surrounding it.

Early has benefited from the support and guidance of Arkansas’ bench and bar. In addition to the lawyers at Walmart and in the University of Arkansas Office of the General Counsel who have supervised and guided her externships, she has been mentored by members of the W.B. Putman Inn of Court.

She also met with members of the Arkansas Bar Association Law School Committee during its 2018 and 2019 annual visits to the school. Through students’ candid discussions with committee members, the committee can provide feedback to the administration on the strengths and weaknesses of the program.

“Interaction with members of the Law School Committee enhanced my networking contacts with leaders of the bar from across the state of Arkansas,” Early said.

Like most of her classmates, Early will focus on passing the bar exam. She looks forward to experiencing a new part of the country and building a legal career in a field that she finds fascinating.

The love of sports, a strong business background, a well-rounded legal education and a natural curiosity will serve her well as she builds her future.