In December 2019, when the Class of 2020 chose Taylor Farr to present their “Greetings on Behalf of the Graduates” as part of their May 16 Commencement Ceremony, no class member could imagine the havoc a global pandemic would impose on their final semester of law school and their graduation celebration. But in true Razorback fashion, Farr and his classmates along with the faculty and staff adapted to complete the semester, and on the designated date the University of Arkansas School of Law held it first virtual graduate celebration. 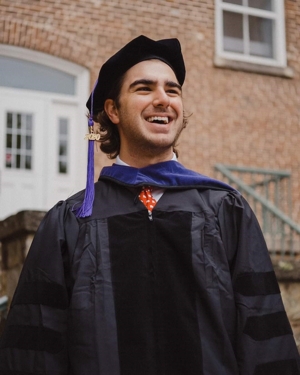 “What an ending.” Farr said. “In all the ridiculous and insane hypotheticals we worked through in the past three years, none of them contemplated the current reality. It has been hard, not necessarily in the school sense, but in the relational sense. So many of the memories and experiences we formed in our minds were pulled out from under us.”

The Proctor, Arkansas, native, who is illustrative of the resiliency of his entire class, comes from a background that prepared him for adaptation to diverse and rapidly changing situations.

While in high school, Farr worked in his family’s agricultural consulting business during summers, after school and on weekends and was immersed in extra-curricular activities.

“It’s easier to ask ‘What weren’t my high school activities?’” he said. “I graduated with 27 students from the West Memphis Christian School. I did everything. It was just something we all did because the school was small … we had to fill out the sports teams, the band, etc. I participated in tennis, track, cross country, basketball, football, robotics, student government and band.”

Farr continued diverse activities and interest in agriculture as undergraduate in the U of A Dale Bumpers College of Agricultural, Food and Life Sciences. Years of “sludging” in the mud of rice fields and scouting cotton, corn, soybean, milo and peanuts set him on a path to a degree in crop science. But Farr’s extracurricular activities were not stereotypical for an “agri” student. He was heavily involved in the Razorback spirit squad, portraying characters such as Big Red, Boss Hog and his most frequent alter ego, the baseball-bat-wielding, Ribby.

“I think it throws people off that I really do have a background in agriculture,” said Farr who traveled with the Razorback baseball team to the 2015 College World Series and coached the mascots during his 1L and 2L years.

In addition to the spirit squad, Farr was involved in Beta Upsilon Chi Christian Fraternity and served as

vice president of social events. He was also director of communication and diversity, then chief of staff

for the Associated Student Government. In 2016, he was recognized on the University of Arkansas

Homecoming Court and in 2017, was a Senior of Significance and selected as a Razorback Classic, the Arkansas Alumni Association’s top 11 male and 11 female students.

An undergraduate professor advised Farr that his skill set was well suited for a career in policy. The suggestion, along with a reverence for “Uncle Walter,” a family member who is a lawyer, piqued Farr’s interest. Farr is the great nephew of alumnus Walter Cox (LL.B. ’66) and says one of the treasures of law school was learning that “Uncle Walter is such a highly-regarded lawyer.”

During law school, Farr was active in the moot court competitions sponsored by the Board of Advocates. He was a member of the school’s ABA National Appellate Advocacy Competition team and won best brief at Regionals. He was active in the Food Law Society and was president his 2L and 3L years. He was the 2019-20 executive editor of the Arkansas Law Review. His comment, “An Af(fur)mative Defense: Using Intellectual Property as a Defense to Employment Discrimination in Mascot Hiring” appeared in the publication’s April 2020 edition.

“Taylor has a keen ability to navigate through some of the most complex areas of immigration law and effectively advocate for his clients,” Zilberman said. “He has a fantastic ability to make clients feel reassured and comfortable in very difficult circumstances. An asylum-seeking client shared with me that she was hesitant to talk about the traumatic events she survived until she met with Taylor and his partner. She trusted them and was comfortable retelling her story.”

Farr has benefited from the support and guidance of the Arkansas bench and bar. He is the recipient of the school’s Robert A Leflar Scholarship and the Arkansas Bar Foundation’s Justice Frank Holt Scholarship. He externed in the University of Arkansas Office of the General Counsel, the Federal Public Defenders Office for the Western District of Arkansas, the International Mergers and Acquisitions division of Walmart and in the chambers of the Hon. Joe Volpe, magistrate judge for the U.S. District Court, Eastern District of Arkansas. He was a summer law clerk at Cox, Cox and Estes in Fayetteville and at Weil, Gotshal and Manges LLP in Dallas.

After finishing first in his class, Farr is studying for the bar exam. He expected to move to Dallas in August to join Weil, Gotshal and Mangers as part of their Private Equity/Mergers and Acquisitions group but recently learned he was selected for a clerkship with the Hon. Bobby E. Shepherd of the United States Court of Appeals for the Eighth Circuit.

“Therefore, I will be making a pitstop in El Dorado, before I head to Dallas,” Farr said.

In Farr’s remarks to his classmates as part of their online celebration he said, “This past few weeks has been an absolute rollercoaster, full of uncertainty and confusion, but smooth seas never made a skilled sailor … Darwin’s theory was not that the strong would survive, but rather those that adapt … Let us remember that our profession is so much more than our knowledge of the black letter law and rise to meet the challenges and needs of our society.”